There are MANY NEW Clinical Trials out there for RA and much more. "Cure Click" is helping to make the possibility of you participating in a Clinical Trial a better less stressful as far as red tape and paperwork!!!

Please visit the information and URL's below!!! 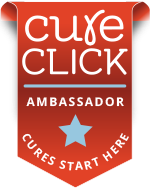 The currently recruiting trial listed on CureClick for rheumatoid arthritis is a clinical study for a biosimilar medication. We have received several messages about this trial so we wanted to post some additional information:

My "Illnesses, Surgeries, and Medications"

When I begin to see others about my "illnesses" , the many surgeries I have endured, and the number of medications it takes to keep my body in a state of somewhat "normality", even Doctors and Nurses have gone into a state of "shock".

Medications: Methotrexate, Plaquenil, Orencia (Once a Week Self Injection), Lisonpril, Pravastin, Prednisone, Forteo(daily injection), Lasix, Valium, Robaxin, Meclazine, BC Powders, Folic Acid, Nexium, Promethazine, B-12 - 1 injection monthly, B-12 tablet daily,Nystatin and Lidocaine (for oral mouth ulcers, sore throats), Carafate, Singular, Metropolol, Ranexa, Sulfasalazine, Multi-Vitamin & I once every 3 months I have to go in and have my pain pump refilled, plus there is probably something I am forgetting.

This does not even account for some of the other illnesses/issues/symptoms caused from not only these illnesses, BUT also from the medications I take. things such a quick deterioration of your teeth from Sjogren's due to the lack of moisture from your mucus members. Fatigue, Stiffness, Pain Chronic, Severe Mouth Ulcers and sore throats, Lupus Migraines, skin thinning, hair thinning, the "Lupus Mask" over the cheeks and nose. (by the way, an interesting fact… Lupus means "Wolf". The illness became named this due to the "reddish brown mask on the cheeks and nose that almost looks like a mask on a Wolf's face).