I've been going back and forth over my "eye" stuff. The double Vision. It has progressed and gotten much worse. Sometimes even now, with my glasses on, it rears its ugly head.

Since everything has happened as it has I already missed my Rituxan infusion and have to reschedule it, my new dentist who also works out of the same facility SW Med, in Dallas, and I am in desperate need of both of those. Plus I feel i may need to see the eye specialist again but I am not sure there is anything else to be done about it,,

I've narrowed the entire issue down to two "diagnosis"
First of all "retinal vasculitis" and moreover all of it definitely lines up as symptoms of Myasthenia Gravis. In fact "MS" and also Myasthenia Gravis came up at one of the last Neurologists I went to. He said it is also difficult to really "diagnose", due to like many of the other autoimmune diseases, there is no "one" test that tells them yes or no. There are a couple of blood tests out there, but just like RA, Lupus and the rest of them... they could be "serum negative" but you have it or be "serum positive" and not.... thus counting on tests right now is usually nuts...

But, my symptoms just tell the story and map out each and every way the symptoms go... so I am including a couple of articles about these, and I plan on doing more research myself. If any of you find something or come across some good information I would so appreciate it if you would post links here etc...

There are lots of good links out there with information so if you fall upon anything that mentions this, as well as anything that might help with Jim's recovery from the accident and trying to learn to walk again... any and all is so needed and appreciated..... Rhia
at April 19, 2014 No comments:
Email ThisBlogThis!Share to TwitterShare to FacebookShare to Pinterest
Labels: autoimmune illnesses, Multiple Sclerosis, Myasthenia Gravis, Neurologist, Sjogren's

Wanting to try and Give You an Update

Of course many of you already know about all that has taken place with myself and my husband, the accident, DC and the entire gamut of the past three weeks. What began as something so wonderful, was so abruptly ended in such a disaster.

I, nor honestly any of us really know what the hell happened out there coming into Dallas on I-45 a couple of weeks ago. There were three vehicles, 2 of which claim that "saw" it all". One man that says he "saw" from his own front porch what He thinks he saw, yet in the blink of an eye, it seems almost impossible for anyone to have just "happened" to have walked out at the exact time that something like this was taking place. It cab happen, and I understand that. But, the odds of something like that happening, and then between "hearing" and turning around to also "see", as I said odds are what you saw and/or heard were more than likely two different things.

I also know there was people that told myself and the gentleman that was at the time helping in in D.C. after all this took place, that my husband was NOT at fault. As a matter of fact, we both were told by the same "trauma" unit physician about the wreck itself, as much as they knew then, the injuries, how many and what "type" of vehicles were in involved. The details were very specific at that time, even down to all of the injuries they thought Jim had, and there was a long list. So, whomever this Doctor was (and I have his name) and also the name of the nurse who called the first time. As I said they repeated the list of injuries, the information about the accident and even went so far to say that it appeared an 18 wheel tractor-trailer that "ran into the back of our car.

Well, in the first place, lesson learned, get a lawyer immediately, if is it fairly bad accident and even if no one was injured, just get one. Secondly, do NOT wait the "10" days for a police/accident report to be "ready:". If you have to CALL three times a day every day until you have it in your hands. That bull about "10 days" was bull. My own insurance company and the others involved in the accident had much quicker than we were told it would be ready.

KEEP everything! Every note, every receipt.... parking, eating, anything... keep each & every receipt. At the time those things do not seem all that important, but that night I took a fall at the very hotel we stayed at, I kept all of my receipts from both. I did not know that I maybe needing medical attention or how badly I was injured etc. Actually I thought I just had a cut all the way through my lip and a scratch or two. Now, I am dealing with an infection and dry socket from a tooth that had to be pulled, along with now I have a chip in the tooth next to the other one, and my lower right hip/back is just giving me the blues as far as pain. Of course do I know that it is he fall? Well, speculation. But, I was not having issues with any of that until about 7 days later. Then it started acting up. Even an any kind of fall, or accident sometimes it is a week or more before all that is really wrong. So, never get up from a fall, or any type of thing such as that, and completely think oh "I'm okay"... you may think... but bruising on the inside, especially deep so nothing "feels bad, or looks bad", until it has had time to manifest itself in the right manner,

For the most part right now I wanted to let everyone know, that as lousy of a time this all is, right now we are just trying our best to put one foot in front of the other. When something such as this takes such a toll on your life... nothing I don't think every truly returns to what you thought was "normal again".
No matter whether an accident, or a chronic illness, anything that "moves" your life in such a dramatic way, forever more gives you a different vision...

I am still not near the place I am really comfortable to write about all of it. I am just trying as I said above, to keep my ducks in a row! I have several things "due" like my Mom's tax form, that I GOT to get done and in the mail by Tuesday, or file an extension...a which if I have to I will..

I also have some "brain fog" type mess happening to me... I think honestly what I need to do right now, is get off this computer, fix me some breakfast & watch a couple of movies for now. I am feeling lousy and my mind does NOT work, when I feel physically crappy... so I maybe back on today and I may not be. Also, don't panic if you happen not to see me post etc this weekend. I do have to finish those papers and get them in the mail, plus I have several other things hanging over my head I just need to get done and off my plate, When those things bothering me, I am never going to put my head back on straight. Plus whatever is going on with my lower back and hip are not helping things at all. I can barely sit HERE when I         KEEP TRYING TO FIND SOME WAY it does NOT hurt to sit. So, I am off for a bit today.... and I will sign back on and talk more once some of this stuff is off my shoulders,..

World Autoimmune Arthritis Day/Convention - Check out the details below! 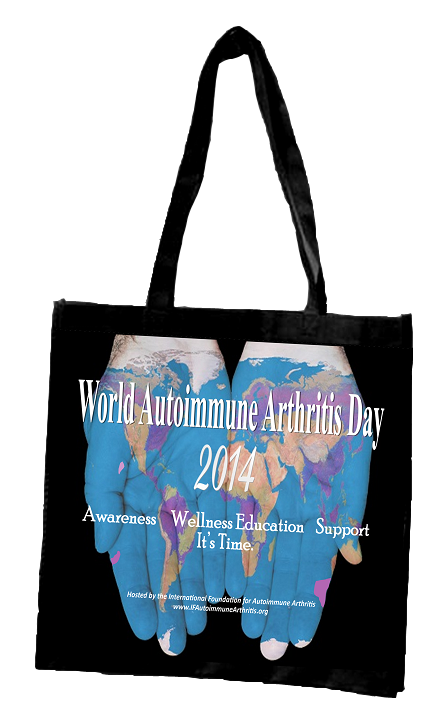 Registration for World Autoimmune Arthritis Day is now open! We have 47 hours of continuous live action, including chats from Christine Miserandino of ButYouDontLookSick.com, Randy Horwitz, author of Integrative Rheumatology, Arthritis National Research Foundation and one of their top scientists will be talking to YOU about research and MUCH more! 40+ booths from nonprofits around the world, an interactive Day in the Life of an Autoimmune Arthritis Patient experience where you can send Challenges to supporters so they can understand!

Pre-Registration is open NOW for $5 USD and you get THIS bag WHILE SUPPLIES LAST for no cost, just shipped to your front door. Why a bag? Because when you have autoimmune arthritis shoulder bags are helpful to tote groceries, carry items around the house and more. Why pre-register? We need to know how much space to reserve in the Virtual ONLINE Convention.

Learn more, pre-register and we challenge you to invite 5 friends- go learn more at www.WorldAutoimmuneArthritisDay.org!

World Autoimmune Arthritis Day is a 47 hour ONLINE Virtual Convention you can attend from your computer! The virtual doors open at 6am ET/USA May 19 and close 5am ET/USAMay 21st
at April 02, 2014 No comments:
Email ThisBlogThis!Share to TwitterShare to FacebookShare to Pinterest
Labels: Arthritis.org. 2014 National Summit of the Arthritis Foundation, autoimmune arthritic diseases, autoimmune disorders, foreclosures
Newer Posts Older Posts Home
Subscribe to: Posts (Atom)