A DATELINE EXCLUSIVE ABOUT SYNTHETIC DRUGS, AND HOW DEADLY THEY ARE.... I felt I needed to share this....

A DATELINE Exclusive from Sunday Night - "Synthetic Drugs that are Deadly"

I am not sure how many of you watch Dateline in the evenings. I usually don't but I had seen an advertisement last night watching the news "just before the unexpected thunderstorm rolled in and caused all hell to break lose at my house" LOL.... then later I did watch it, and it was about some teenagers in a small town in Missouri, all honor roll students, all had never really partied, drank, or did drugs... and one of the girls decided for some "odd" reason she wanted to try "LSD". She had just "aced" her ACT scores for college, and got what she thought was two small "squares" of LSD from a friend, who knew a friend... all of which thought it was LSD, and nothing else. Although the "dealer" KNEW it was one of the new "designer drugs" that were coming out of China, not regulated, some of them even the DEA were really not aware of, and they found their way into this high school. Well, it was NOT LSD, but something so powerful, with a "synthetic chemical" in it, that you cannot even handle a tiny square of it without gloves on, because it can soak into your skin and be deadly... and you can't tell from one "square" to the other how much of this "drug" is in them... none of it is regulated, or made in a "lab" like anything we know of... well the

Senior had a girl friend over, and (I thought it odd to think of them knowing much about LSD because you really don't hear of it much anymore) and her parents did not know that her and this other friend took each a square of this "drug".... one lived and the other DIED! It took awhile to track down through the pipeline of how she even got hold of this drug, but it was through some other kids at her school, none of which "sold drugs" or even did drugs, but did this as a favor for their friend... even though some of her best friends tried to talk her out of it... well, the parents and a younger girl left that morning, thinking the girls were sleeping in after being up late until they got a phone call from the other girls Mother. She had come over to pick up her daughter and here this other girl was not moving, no pulse, lips already blue.... and it is known that LSD in itself is usually NOT deadly... it may cause people to do stupid crap like jump off buildings etc... but not in itself kill people... anyway, it was some type of designer synthetic drug that NONE of the kids, parents or even the police dept or anyone who even heard of... and here it was in the kids high school.... it was a heartbreaking, but EYE opening story.... that can happen anywhere, in any town, large or small... I know the China has been stopped by the DEA of exporting MANY of these to the USA, and they have confiscated TONS of this cheaply MADE yet they make "millions" off of this stuff dealing it KNOWING IT CAN BE DEADLY!!!!! As I said, it truly was an eye opener... I've heard of a few "designer" drugs, but I had no clue either about how prevalent they are because they can be gotten to kids very easily, and are not costly like some of our other illegal drugs, even "pot" at times is known to be "laced" with this stuff... thus you think you are smoking it, and yet you are ingesting something deadly.....

Here is a link for more information..... 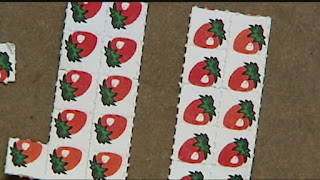 Here is one photo of what some of these can look like, but some are in packages, and I guess even sold in some stores across the US

Here is another link for more information: 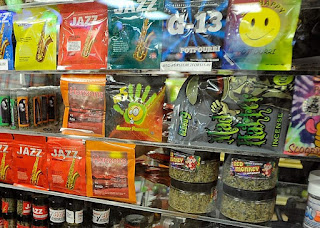 And these can be sold a Gas Stations!
at February 22, 2016
Email ThisBlogThis!Share to TwitterShare to FacebookShare to Pinterest
Labels: China, deadly synthetic Drugs, sold at gas stations, teenagers