As Usual NOTHING is simple when it comes to MYSELF and MANY others with COMPLICATED AUTOIMMUNE ILLNESSES!


DO COMPLICATIONS EVER END????

Once again, my autoimmune illnesses play a difficult part when it comes to my health, my life, and after something like a major surgery.

Many of you know I had taken a hard fall on my hardwood floor on December 13th - which led to 2 fractures n my right hip. I had staples in it, due to two incisions, but I had a rod and screws put in and did not have a complete hip replacement, which we hoped meant I would be home sooner. SO MUCH for that thought! I should know better by now to :"assume" anything I have done will be "simple".

The surgery, the rod and screws, which I got to see on an X-ray yesterday January 6th, are healing well. I had a complication with my foot, thinking it was fractured, but I found out I have a torn ligament, which probably began when I twisted my ankle back in June so severely, then the fall, in which also involved my foot being "hung up" and caused the fall, then probably tore that ligament the rest of the way, thus now my right foot is in terrible pain, when I am standing or trying to rehab the hip. I've had to learn to work past the pain in my foot, thus the rehab portion on my hip is going very well. 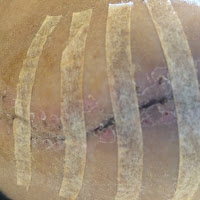 Even my orthopedic surgeon said yesterday, that in spite of my complicated health problems, I am doing extremely well, and past schedule in a good way, compared to what he thought I might be. He was telling his nurse, that due to my attitude and willingness to work with therapy, I am doing very well. Yet, between the anemia, the liver enzymes being high, and now this "hematoma" that developed on top of the main incision after the hip was repaired, I face another surgery this coming Tuesday. 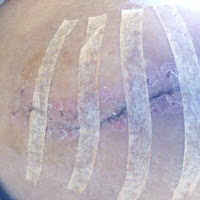 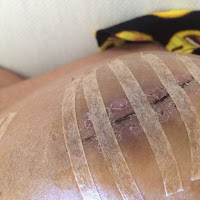 He has to go in and drain the "grape jelly" as he called it, the blood that has accumulated like a huge blood blister under the skin, and put a drain in it, so we can get rid of the huge "mass" right on my thigh, that makes me look "deformed". He said in his report, it is big as a softball. WOW! I knew it was large but "softball size"? So, rather than GOING HOME EARLY NEXT WEEK, I face yet another SURGERY! So, that delays me getting on home and back to my life, as I wanted to.

It certainly takes the idea of my neck surgery that I need so badly, completely out of the picture, and makes me want to "run" if I could somewhere that not a soul could touch me, and just be totally alone, perhaps with my puppy, Peanut, and the new puppy that awaits me once I get home.

Here are a couple of pics of my new little boy 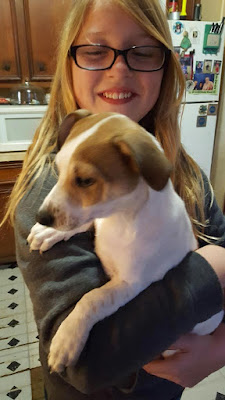 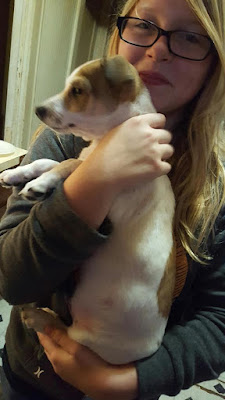 who awaits me: He is apart of what keeps me on focus to hurry up get well and GO HOME!!!! along of course with Peanut also a Fox terrier....
at January 07, 2017
Email ThisBlogThis!Share to TwitterShare to FacebookShare to Pinterest
Labels: autoimmune illnesses & complications, blood work, broken hip, celluliitis, hematoma, hip fracture, infections, liver sonogram, new fur baby, pernicious anemia, protein lack of