Delving Into "hopefully" a New Outlook on Rheumatic Illnesses & finding Ways to get the word out to Others... Possibly a New BOOK, A new "Non-Profit" to be active with, and a "new attitude" for myself "Relationships" Chronic Illnesses, and Life

I've been basically "drowning" in my own sea of dispare over the past several months. TODAY being the 1 year anniversary of my Mom passing away, of course makes things even a bit more "difficult" to hold my head up and move forward.

I have a close relative that talks often about "being lonely" and is alone. In other words right now there is no "one significant" other, and I totally relate. My situation is much the same. The only "significant" other for me, is Peanut, my "Holi-Terrier"... as I call him! :)

So, I get the times that you wished there was someone there to talk to, to go to the market with, to go out and grab a bite to eat with, someone to be with you when you go through tough surgeries, or doctor's appointments... and just basically someone to "share" life's up's and down's come what may.

After my last "breakup" I told myself, I would NEVER "commit" again. I feel as if there are basically "3 strikes" against me as far as very long-term relationships, and for me, that means I am just not cut out for the "relationship" thing anymore. Possibly I was NEVER cut out for it, but I was damned and hell, that I would NOT give up! Thus my 3rd one, I thought was for "infinity". Well, NOTHING here on this Earth is for Infinity! One way or the other ALL whatever it be shall come to an end.

I've given much thought to either venturing out on my own, to a club, and I tried the church situation for awhile, and I need to get back to going. After I had all of the problems with Mom, then me and my own surgeries and so forth, I just had to stop going for awhile, until I was well. Furthermore, I really feel badly stating this, but although I was a "new member".... not ONE PERSON ever even bothered to check on me, or see why I suddenly stopped coming. This is after I had "joined" the church. Frankly, since I was actually ill, and had surgery etc. it really hurt my feelings that not one soul bothered to check on me. Besides, I (and maybe it was just my own stuff) but felt like my "tidings" were not "enough" weekly. Yet, I was giving what I felt the Lord asked me to, and also being with only my income which is very low, it was as much as I could give at that time.

Anyway, not to get too deep into religion, but it left a bad taste in my mouth. Yet, I will go back, it maybe that I go to another church, and not back to that one.


I have long been a follower of "Creaky Joints" a Non-Profit started by Seth Ginsberg who himself developed a Rheumatic Illness in his 20's. Like many of us, he found there was just not enough information out there for patients and caretakers. Actually in many ways there was not a great deal of information back just a few years ago for the medical profession. I was shocked to find out how many nurses, and even Physicians knew little about some of the autoimmune illnesses, and many tied into RA, Lupus... things like Sjogren's, Raynaud's, and MANY other AI illnesses that are "joint related" yet also effect other parts of the body.

At times I felt as if I was "educating" my own doctor. So, Seth opened his mind, his heart, and his talents to begin "Creaky Joints", which recently began a new program and app actually called "Arthritis Power". I just recently got it to download on my phone, and I have it open on my computer.

As I begin the "journey" through it, I hope not only does it help me, but it gives me the
"heart" to once again write on my book, and get myself advocacy back on tract. After the ordeal with my Mom in 2016, and then her passing away only 6 months after showing signs of "Lewy Body Dementia", it was quite a shock for me, and my family, friends of the family and other family members.

So, rather than ponder this "lonely" phase in my life, after talking with a wonderful woman on the phone earlier this week, that is a part of "Arthritis Power" I was inspired to try and give myself a break, and find that "voice" that can take me wherever I want to go, whether writing, blogging, being more involved in the advocacy, activism, and Ambassadorship roles that I so love being a part of.

So, here below are a couple of links. You can go to these and find out more information about "Arthritis Power" and "Creaky Joints"..... 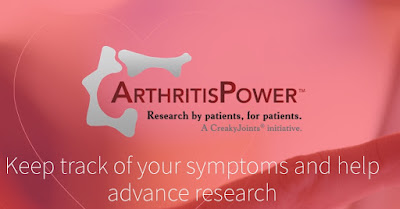