Not totally "getting" Life & where it leads, where you follow, who is put in your life, who "walks out", & trying to Cope....

I didn't post this on my Facebook page... and I probably should.... because the way things are in my life now, Honestly, I do NOT give a damned who thinks what.... I lived MOST of my Life "stressed" over "who said what", and "what someone else thought" and the entire thing is ridiculous.... I honestly never cared if those that were "jealous" were... I never felt I had anything to be jealous over... I worked, tried to raise my two kids, had a "modest" home in a small town, and there was not a thing for anyone to ever think I had that was worth being hateful, spiteful, and "green with envy" over.... I had my "Dad's" personality, and I never met a stranger.... I was nice to everyone, did not matter, male or female, yet out of every "boss" I had that were women, they all just could not stand my "way" around people. It was ridiculous, because each and every one of them, had more than I did, one was married to a lawyer, and had a job well over my head, ah but after "firing me" a 6 years employee, that was told my the ER doctor to stay home, a few months later she lost her job... and that happened several times.... their own "greed", "envy" and so much of their "life" spent making me and everyone miserable, yet they got theirs also.... and I never had to do a thing... just go about my own business, and allow what was to happen... happen...

But, I "lost" a dear friend... that I talked about in my last post... I had not seen him in years, and as I have had time over the weekend to think about it, I am still saddened and at a loss .... why him? Why did it take me so long to find out? Why did someone not tell me? There were not a great deal of "people" that knew about him and I... we kept it that way on purpose... we never "hid" our friendship, and I often visited him where his family business was, which was a restaurant in a nearby town, and I lived not far from there back then... So, it was never a completely hidden relationship, but we just preferred the times we spent together listening to our favorite music, and bands, and having a beer, and talking, laughing, without any distractions, without any "gossip", oh but I am sure there was plenty of gossip, I just cared NOT to listen at the time... "we" knew what we had, and that was good enough for us.... there was a respect, we treasured those times, and tried to see one another when we could, but he worked a lot, or he had other people, friends, family, and at the time... neither of us thought about "more"... what we had together, was "more".... I've had time to remember those times that I would "pop" in on a weekend, maybe a Saturday, or drive by and find his truck at home, so I stopped, or even time he was not home, but I was always "welcome" to be there, even if I just needed somewhere to get away, from all of the "crap" of my life back then...

I was and still am "angry" at myself, for not trying to contact him... I should have, I am not sure he even knew I was back in TX, and had been for a long time, just down the road a bit... but I had "my life" and lots of it during the past 13 or so years, have not been the most pleasant, plus, I guess I was "busy" with my own issues and trying to find once again a purpose, other than being SICK! With all of the "illnesses", the autoimmune problems, the surgeries, the scars from knee replacements, a shoulder replacement, finally my "pretty teeth", that were and are not "my teeth" yet they are pretty... just not the way I thought it would be...

So, after much thinking about it all, I am posting this Obituary, and what bit I could find about him... I think it is the very least I can do, for someone who was and had remained near and dear to my heart... and this morning as I listened to Brooks and Dunn, and recalled how much we loved all of their music, and how many nights, we spent dancing to those right there in his living room, I feel I must post what I know  - now.... and I hope to find out more, I would like to know what happened to him.... 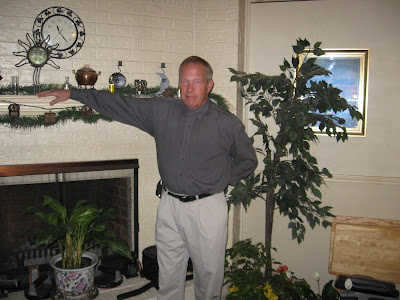 He was born April 19, 1957, in Corsicana to William and Corrine Blackwell.

Ronnie graduated Corsicana High School and attended Navarro College. He also served as a member of the Navarro County Peace Officers Association and Society for the Prevention of Cruelty to Animals Organization. Literally growing up with the restaurant concept, Ronnie devoted many years of his life to continue the legacy of the family-owned business developed by his mother and father. Bill’s Fried Chicken and Cafeteria always remained a large part of his life.

Along with his interests in animal welfare and golfing, Ronnie was a Texas Longhorn fanatic. He devoted much of his time and energy by showing loyalty to support the “Burnt Orange Nation” football program.

He is preceded in death by his father, William “Bill” Blackwell.

A memorial service will be held at 2 p.m. Saturday, July 16, 2011, at Griffin-Roughton Funeral Home Chapel with Bro. Floyd Petersen officiating.

Should friends desire, contributions may be sent to the SPCA of Texas.

at November 02, 2015
Email ThisBlogThis!Share to TwitterShare to FacebookShare to Pinterest
Labels: allowing life to pass you by, Bill's Fried Chicken, friends, illness, life's up and downs, losing tract of cherished ones, Ron Blackwell