This is something that really shocked me this morning. Due to having Sjogren's as well as already having not just 1 but 2!, Heart attacks I truly wondered WHY there is NEVER much talked out, put in the news about, or for the most part NONE of my PC doctors RARELY if EVER mention it during a visit. I began being very concerned as to why, since I have some really "severe" symptoms, that honestly I feel have been "swept' under the carpet by the medical profession! So, I have been the one who "researches" about Sjogren's, how it effects us that have it, and sometimes having it as a "primary" autoimmune arthritis illness, rather than a "2nd" that goes along with another AI such as Lupus, RA, and the like.

I ALWAYS go in with the "latest" on medications of I have it, from the RA, Lupus, Sjogren's... and so forth. And believe it or not, several of my "suggestions" on what my "research" tells me, I may very well get some positive results from something. IT is the TRUTH, that had it not been for my "Own" research, and "self-education" I would never have been on the Latest medications called "Forteo" which is for osteoporosis. Mine is so BAD, my numbers are practically "off the scale". When I told my Rheumy about it, he immediately said you are a perfect patient that will get benefit from this. It actually does not just "strengthen" what "bone" you may have left BUT it actually helps your body to "re-generate bone"!!!

I have several including this Sjogren's mess. I began to dig, Google, read, ask questions, and try to fine out about it. SJOGREN"S'S si NOT just a case of "dry eyes and mouth"! IT causes your body to NOT be able at all to retain moisture of the mucus membranes throughout the body. So, this is not just a "dry eye and mouth" issue, it can turn into a very serious autoimmune disease issue, causing fatigue, low grade fevers, severe dental caries (rapidly) that must be removed because of the way it effects the teeth. Rather than like a "regular" cavity that begins on the outside of your tooth, Sjogren's begins deep inside the tooth. So, by the time you really know there is a problem that tooth or those teeth are already too far gone to be "repaired". I went with this diagnosis, as 2nd to Lupus, RA, Raynaud's, & a whole host of possible AI illnesses, yet u until about 9 months ago did I begin to suddenly have very severe cavities, that were already bad enough to have eaten holes too large to fill! Many of them would break off at the gum line even if I were not eating anything you might think would cause this. It started with one, and within 6 WEEKS, I had 3 pulled! It just kept getting worse. My fear was that there would more to follow, Just as I expected, after a "panoramic" X-ray of my entire mouth, MOST of my teeth are already too far gone to "repair". The very "few" left, could also begin at any moment, leaving me with NO teeth! It has literally frightened the hell out of me. Here I am, 54, and that is not that old, and my teeth are breaking off & having to be pulled frequently! So, I began asking my own dentist about alternatives, especially with the Sjogren's, and I was told by several, along with my own research, that regular "dentures" would probably not do well, due to the dryness of my mouth. The dentures would not be able to make a kind of "bond" well & they may not stay in place. So, I found out about the "mini implants", of which I am supposed to begin having put in. The procedure takes several months. First of all, it means pulling ALL of your teeth, then making sure the jawbone is healthy enough, and that you have enough of it to "hold" the little "gripper like" metal stubs they put in usually in 4 places, two upper and two lower, that will "snap" the final dentures into place and hold them securely. But, this takes months to accomplish AND it is certainly NOT CHEAP!!!!!

I have went to three dentists, and the estimates vary greatly. I had one that told me it would be something like $15,000!!!! I had another that was a couple thousand less, depending on the bone etc. Then another one told me $8,000,00. Well even that is astronomical, as far as "cash" pay out of pocket! Even though I could fight with my insurance to pay possibly to pay 60%! But that still leaves me 40%! And in order to have my health insurance pay for this, it takes the dentists helping to get something in writing, with diagnosis codes that indicate this is a "health related chronic issue" NOT a dental problem in itself. It is caused by the disease in other words. Well, it also means finding a "true" ORAL SURGEON! This is where I ran into all kinds of red tape and dispute. I come to find MANY dentists now "call themselves" oral surgeons. They take special classes over and above some dentists regular schooling. Those types of classes give them a "certificate" of being able to "do" oral surgery, thus the implants and so forth they can do. BUT, if they are not "fully licensed, fully fledged Oral and Max licensed by the state, before they are considered a "full Oral & Max MD". Of course I have found both, and many I find are the "1st kind". The "say" on the phone, on their websites & in their ad's they do these procedures" BUT they cannot help to give you a form that you can file with your insurance company to get that 60% paid back to you. I've been through phone calls, "so called free" consultations (watch that, it can come back to bite you in the butt), & I saw the "words Oral Surgeon/Surgery" & it is NOT what you need in order for this "chronic medical condition" to get considered a "health problem". Without that or without any type of dental insurance or health insurance. So, you are stuck holding that very outrageous bill, knowing your choices are not many, & trying to figure out how the heck you are going to suddenly pull anywhere from (I even read $25,000.00) yesterday - to $8,000.00 and so forth out of your butt to pay for this!

Fortunately, there is now a "medical/dental" Credit Card, called "CARE CREDIT" that is just like any other credit card. You apply, if they accept, they send you a credit card to use especially for medical/dental issues. And if you pay the procedure out by that allotted time. IF not, you pay monthly payments with interest just like any other credit card. Now, this is definitely a "God Send" for many people. For one, I believe it being something that your dentist can help with, as far as getting you enough "credit" to get a procedure placed on the card. And it is strictly for medical/dental purposes... and I "think I found out things like elective types of stuff such as face lifts, breast augmentations, and so on.

Still even though this "pays" your dentist, you are still going to have to shell out the money in big chunks or monthly installments.

As you read at the URL below, about Sjogren's and think about just how it, as an Autoimmune Arthritic Illness has been shoved under the rug as I said earlier, I will say for myself, it has been a very "earth shattering" experience for me. I am terrified of having ALL of my teeth pulled!!!!!! YET!, they are cracking, breaking, chipping and falling out a a rapid rate anyway, my choices are slim to none!

AND trust ME, I surely do NOT have that kind of "cash" laying around to just jump into that reclining chair, have a bit of "laughing gas" put on & get all of your teeth jerked out... then spend another 120 PLUS days awaiting for those implanted posts in the jaw bone to properly heal enough so the dentures can be attached and unattached and remain strong in the jawbone.

I urge all with Sjogren's whether primary or 2nd to one of the other AI illnesses, to do your homework on this. I feel many of us have been "left in the dark" way to long on this chronic disease. AND NOW what is EVEN WORSE, we find out that this illness can also have a HIGH chance of causing us heart attacks on top of everything else.

Below is the MedPage URL: 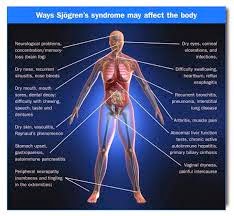