Dementia, Alzheimer's, "A Quilt to Remember", getting back to somewhat of a normal, life, Advocacy work, & making a "Quilt Block" in Memory of my Mom & both Grandparents

Alzheimer's, Dementia, Quilt to Remember,Mom, my Grandparents, and for our generations to follow

I have not been able to sleep again in a couple of days. I am not sure if it is just being "down" during the day with my ankle, or feeling a bit "edgy" that I am NOT up and doing some of the things I need to be doing. Both pups have also been restless, especially tonight. In fact the little one my Peanut Holy Terrier, :) was a bit sick to his tummy. But, that pup will EAT ANYTHING! I have to constantly keep a watch on him...because if he can get his paws on it, it's going in his mouth, and more than likely he will eat it. I hope it is a "puppy thing" for I know my Tazzy did that when she was little. But after she turned about a year old, she got out of that picking it any and everything in her mouth. Plus he CHEWS on everything! My other two did, some, also when they were in their first 6 to 9 months, but after that, they began to ONLY CHEW on what they were supposed to. I hope Peanut does the same. But he is definitely, "a pup of a different color" for sure...LOL! Stubborn as a Mule, yet he is coming out of that a little now. He also thinks my hands are "chew toys"...so we have really been working on NOT "chewing, nipping" at Mom's hands and on Bub's ears... They seem to get along good, but there are times since Bub's is older, he gets enough, so he puts Peanut "in his place"... he never hurts him, he just gives him this "look", and Peanut KNOWS to BACK OFF playing for now... :)

They both like me to sign to them, and I did finally get Peanut a "song" I made up, plus he already is getting a couple of nicknames, I catch myself calling him "Pea-knuckle" (spelling like the game Pinochle" - or LOL something I bit "off" color, since he was neutered, I call him "Peanut-less" at times.... LMAO! Well, believe me ALL of them have had several names and always learned that by either that name, OR my TONE or BOTH, either things were good, or they had done something "not so good".... just like kids, these fur-babies, seem although at times to continue to be fur-toddler's most of their lives... They have really been "trooper" though.

Through all of this with my Mom, I had to be in and out so much here at the house with them, and that was something they have not been used to, I know there were days they both could not wait for me to "cling" the keys and open the doors and both standing, jumping, barking, and crying for joy that "Mom is finally HOME"! So, it has been a difficult time for them, a totally weird schedule, and not our "normal routine", although I tried to give us "our time" each evening together... and then I know they have sensed me being upset, in a turmoil, and also both of them especially Bub's knows when I am not well myself, and it is almost like he "watches" over me, sitting beside me, and even at times he will be there, and he will just let out this kind of almost a "cry" wanting me to "sit down" with them, and be still for a little while. So, having me "home" the last couple of days to themselves more or less, and spending time down with my ankles, they have been in heaven right beside me.


Okay... now to another reason for this POST, I want to do a "quilt piece" for the "Quilt to Remember" tour that is going around the nation in honor of those who have had these horrid diseases of Dementia, and have taken away their minds, in so many different ways, time frames, and so forth. I had been an advocate already in many ways for the Alzheimer's Association but I had forgotten about the quilt. So, when I wan in getting information on where to donate in honor of a loved one etc, or in memory of someone, I saw that website about the quilt.

Since both of my maternal Grandparents had some form of Alzheimer's and Dementia, and now my Mom, I want to do a quilt piece to go with this quilt around the country. I've submitted my "story" and asked for instructions about the quilt block, which for an individual is 4 feet by 4 feet.

Since my Grandmother made MANY quilts completely BY HAND, not one machine stitch in them, and I have also been able to do a quilt, and have actually a oversized, probably King sized almost top finished for a quilt, I decided what better way to "give back" and also hope to help to find the reasons for these horrid, mind taking diseases, and give hope that we find reasons, find more help, have more research, find a cure, or find out what we can do to completely STOP some of these types of dementia's. I am enclosing the "link" here for this project. I have several ideas already and really already have materials etc, (some I found over at Mom's, and I think it is still good enough to use in the quilt) and am waiting to hear back on details about the quilt block and getting it to them - 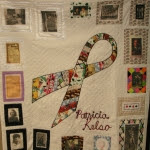 Created by Colleen Anderson,
Fargo, ND,
in honor of her mother, Patricia Kelso 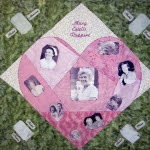 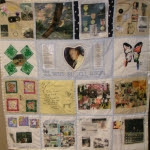 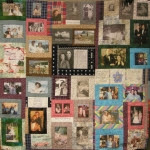 ALL of these are from the website about the quilt! Plus there are many, many more that give me some wonderful ideas for doing one in memory of my Mom.
at June 18, 2016
Email ThisBlogThis!Share to TwitterShare to FacebookShare to Pinterest
Labels: "Go Purple" for Alzheimer's Awareness Month, Alzheimer's Association, being ill & taking care of an elderly parent, dementia, family, Lupus, quilt to remember, RA