Processed Foods, Sodium and Autoimmune Disease? YES! They may just be related!


Great Article!WOW! As much as I stay away from salt, salted foods, fast foods (it is a real treat to get to go to McDonald's once or twice a month) and try and not eat as many processed and refined foods… all of us know with life being as busy as it is, means we sometimes would not eat without some of this. Having a few thing at home, that are "quick" for dinner especially, are almost essential in many households. I am a label watcher. But, I have to admit as MUCH as I watch labels for fat, calories, and carbs… I am not as great about looking at the sodium content as I should be. I have had high blood pressure since the age of about 16! And it was not from my diet and so forth. Mom cooked well, and there were not many processed foods in our home. Back then processed foods were not as prevalent either. People really COOKED! Not frozen fish stick, corn dogs, and frozen fries, or the huge amount of pizzas and TV dinners like now! It always just boggles my mind when I go into the market. Here is an entire isle dedicated to frozen pizzas!!! I can't believe there are even that many. Then the next isle is an entire line of every kind of frozen "entree", dinner… etc… and I can only imagine how much sodium are in the "light" or low fat ones!!! As "we" at my house know, and we all should know, in order for the manufacturers to make "low fat", "fat free", "light" and so on frozen foods, canned foods, processed stuff like packaged bologna" the list just goes on and on… they USE SALT to make it "taste good"!! Chips, an isle full of chips, Ice Cream--- damned what happened to Vanilla, Chocolate, and the mixture of the two with strawberry in it??? My Lord, you can spend hours looking at the ice cream itself.  Of course then there is the cereal isle. Now I must admit I do buy a large amount of cereal. I eat it sometimes just dry as a snack. We try to stick to the ones that are also "more healthy"… yet I am sure the sodium levels are tremendous. Candy… another complete isle and at Wally World, it is two isles of candy! Okay where is the "healthy lower in SALT, fat, carbs and calorie foods in these places???? Good question! And people wonder why we have so much heart disease, diabetes. autoimmune illnesses are running amok in this nation, high blood pressure, strokes, blood clots…. damned our diets you think?  REALLY PEOPLE!!! WE are our own worst enemies and the coming of our own demise! IF we did NOT LIKE all of this junk, they would NOT sell it! So, m who's to blame here???? 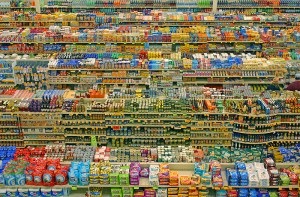 at November 03, 2013
Email ThisBlogThis!Share to TwitterShare to FacebookShare to Pinterest