What do you do when you just don't know what to do? Discograph, CT Scan, and just FED UP!

I've just about had my fill of physicians, medications, tests, evaluations, scans, and everything else that falls within and in between the realms of "chronic illness and chronic pain"....

It is like no matter how hard you try to do ALL you can to make things run smoothly, you can bet someone will be either rude, hateful, or other words I guess I won't say here in this post, but it rhymes with "witch"...

I've been on the phone with the different doctors offices this morning, TRYING to make their job a bit easier. Both times, and it was both the doctors main nurses, that decided rather than be "nice" they were going to be jackasses.

The first one, has always been a jerk. I don't even know why she continues to be a "nurse".  Her personality along with this particular doctor's as about as kind as a brick. You feel like you are little kid being punished over something you didn't even do. I tried to ask her question, as she began rattling off to me what "the doctor said"... and rather than her give me a moment to ask if he "has all of the records" from my pain doctor that did the injections, and did a follow up, she told me, it matters not, and I don't have "time" to dig through your chart to look! What an ass! Well, if those records are NOT there, then it could be that the doctor does NOT have the whole picture. In the first place, my pain specialist, who has known me now since about 2008-09, I TRUST! When he told me last week a "discogram" was redundant and not really necessary since the injections helped for a few days... that if surgery is needed, then get it done, and don't wait. He is usually "conservative" but his main issue is that he fear with the insurance I have, if I put it off and it gets worse, my insurance may "buck up" and give me hell having it. Thus he said before I have worse problems, worse pain, that he recommended to go ahead and have it. It is just one "level" for now, which should not be nearly as "less likely" to do well, than if I were either older, or something else happens like I get a compression fracture from the osteoporosis. In fact, he said that I could already have one or more but, things could get worse. As usual, each time I've had a joint surgery, when they actually get into the joint to see, it is a freaking mess. I've been told that with EVERY joint replacement I've had. Every time it seems it is much worse than what any scan, MRI. X-ray etc every shows. Last time all of the "damage" was deeper into the joints, thus no scan would have ever shown it. They had to go by symptoms, amount of pain, and kind of figure from everything I could tell them what was going on. And each time I've been right. It is always worse than it was on a scan.

So, to now want to put me through yet another, much more invasive "scan" or discogram, he should be aware of me also... that I am not the "usual" patient. There always has to be something "different" with me... I am always the complicated, never know until you know what is going on.

So, now today (May 7th, 2015, I get a call to "schedule" the discograph, gram - whatever they call it, which is by more than one name... and they tell me I can have it done anytime, just tell them when. Well, this week is totally out of the question. I will again have to see if my son can take me. This will be done at Medical City in Dallas, at one of the "specialty" radiology places there. So, as I look at the calendar, and of course I am hurting today bad enough to scream, but this weekend is Mother's Day and if the WEATHER will act right, Mom and I are going to the Casino... but of course the weather is showing to be not so great Sunday and Monday, so once again, I maybe cancelling the trip. Plus here it is Thursday and I have not even began to get ready. I don't have anything thought out to wear, both my nails and toe nails need to be painted, and I need to decide what to pack and so on, and so forth. The weeks tend to go by much too quickly. It is Monday, and before I blink it's Thursday!!!

So, next week it out. Plus that is really not enough time to give my son a chance to work it into his schedule. So, the followng week I already have 2 doctrs appointments in Dallas. My Rheumatologist on Wednesday and then my pain pump refilled on the Thursday of that week... so they already have me plenty booked for that week. Thus that leaves the last weekend of the month. Which again seems like forever when you are hurting, and after I hung up I said Damned maybe I should have scheduled it for next week... but again I have to have someone to drive me home... so I have to give him time to schedule that in also.

It sucks now, because there is no way, no how, Jim nor Mom can drive... and Mom not at all in Dallas, hell it is already bad enough in Ennis....

So, now I have this thing scheduled for May 27th at 7:00 AM and they will do this at 8:00 AM. I've got to look some things up. No one mentioned insurance and so forth. So my though is she was the "nurse" who schedules everything, and someone else from the business office will be hitting me up for insurance and money.

I hope to Christ it is about what the injections were, which still is NOT cheap.

Yet after the article I read about Spondyliti, now I am wondering if this should be an issue I take up with my Rheumatologist anyway before I start having an invasive test. It could be that there is damage there and the tests don't see it, as usual on me, OR if I do have this, then it maybe 7 to 10 years before the evidence shows on any type of scan... here is the URL to the article:

Which if that is the case, then this could be something that a medication change or something may help rather than going on with a test that could lead to very lower lumbar/sacra; (L-5/S-1) surgery. As I say, say and say again I REALLY DO NOT WANT TO FACE LOWER BACK SURGERY!!! It totally frightens the hell out of me. I've heard TOO MANY "failed" back lower surgeries, that either put people in worse pain, in wheelchairs, or lead to other back surgeries to fix the first one.

Of course I did also say that about "cervical neck surgery" also. Yet, when it came to knowing I would have "RELIEF" from the horrid shoulder blade pain I was in, I was ready for anything to take it away... thus as soon as I came out of the surgery, the pain was basically gone... so there are times that any kind of "back surgery" that can give a pretty good rating of helping to reduce pain and give back motion is something to consider, but also consider very seriously about all things involved... so I cannot say NO, I WON'T .... because if that is what it takes to rid me of this pain, where I can move forward with my life, and writing my book, then I may not have any other choice but to go along with it.

I will post some information about the procedure in a bit. Again, I am hurting having to sit and type... so it's time to get up and move around for awhile.... 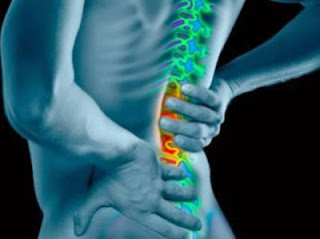