Sonograms!!?? Why have Doctors NOT already done these???

This just totally blew me away! I've fussed and griped for YEARS about how each and every time I've had to have a "joint surgery" and how badly I was in pain; plus do to my joint history, the, the DJD. the DDD, the RA, Lupus and the list goes on and on, when I go in with a joint hurting, it usually means we are destined for surgery, maybe even replacement. I recall when my left elbow gave me so much trouble, and not long after my left shoulder began to drive me insane with pain, loss of range of motion, stiffness, and the entire gamut. I went through all of the tests, the MRI's. the CT's, with and without "contrast", X-rays, medication and nothing usually worked.  I may have some relief from a corticosteroid injection into the joint, and that may last for a day, month and sometimes even a year. On my right shoulder, I had several rounds of injections, way before we did any type of arthroscopic surgery. Yet, even though all of those "expensive" tests, that were supposed to be the "gold standard" when it came to diagnosis, may show some damage, spurs and so on, BUT, when every surgeon that did my various surgeries actually got to "see" the massive amount of damage in the joint, they then understood why I was so adamant about NOT using those tests as much, as more "heavily weighing" from my long term symptoms, them actually getting worse than ever better, and that there much more damage in the joint than any type of scan, MRI, and so forth ever would show them. In fact, my orthopedic surgeon who did both my complete right reverse shoulder replacement and my 4 level cervical neck surgery, told me himself. The damage was so deep, and it was extremely bad, but there was no way it would have shown on any test. Sam thing with my neck, it was the same with my elbow on the left, my shoulder on the left, and both knees. It never failed that the doctors would always tell me that what they actually saw by doing the surgery, was far more worse, than any type of a scan, MRI and so would have ever shown.

I have also said that I felt that any "scan", MRI, X-ray and so forth is only as "good" as the person it with experience and knowledge to read them. I can just tell, from all I've heard about and read, that often things are NOT found, or they are far worse, than what the "radiologist that read them said.

It just stands to reason, if someone has the "education" yes, that is a huge part of it. But, when you are looking at something as complicated as the inside of a joint, or any organ for that matter, if you don't have not only the knowledge but experience to totally "see" all of that entire ordeal, then all too often, I felt things were ""missed" because of whomever read them, didn't have enough experience or possibly training, to not miss something. Again, this is not just joint related but any type of scan, and so forth, things could be missed, and could cause serious issues if they are not caught in the beginning.

Same way with "blood work"... they are coming to find with many diseases, that all too often that "blood work" again that is supposed to be another "gold standard" for diagnosis, MAT NOT BE accurate. It could have been not processed quickly enough, or no refrigerated in time, or blood work has been known to get "mixed up" and maybe what was read had nothing to do with you. Many may not realize it, but on some of the very complicated blood work that they do, it may be actually "shipped" even out of state to be processed. Some of these tests either take extremely high dollar equipment, time, and the person to make sure it is done accurately. Again, there can be a mix up, something not processed in time, left out too long, or any number of things could "go wrong" before the actual test is ran, and the outcome that is "right", could be wrong.

I know I am NOT the ONLY PERSON who has been through this very issue. Even when I had the double hernia's. I had 2 doctors, a sonogram tech, a PA, ALL miss the HERNIA"S!! I knew they were there. I even told them exactly how to locate them, and why they would not locate them if I lie down, they would kind of "settle" down into my abdomen, and then they were difficult to locate. Yet, I have one huge lump on the left, and the one on the right had just began to show. I finally went to a regular SURGEON. He "found" them immediately and said I needed to have them both repaired before they got worse. The one on the left was already getting fairly large and the right one was headed that way.

Yet, even with a sonogram, 2 doctors, and one PA all doing an exam, none of them found them whatsoever. Yet, I was persistent, that I would NOT take "no" for an answer. I had at least ONE hernia, and I planned on getting someone to freaking listen!

Well the week after seeing the surgeon, I went in and had a double hernia repair.


So, went it with my elbow, my knees, both shoulders.... no matter how many scans, tests, reports, experts, and all that are involved WE, KNOW our BODIES better than anyone else. And if YOU FEEL SOMETHING IS NOT RIGHT, then do NOT TAKE NO FOR AN ANSWER! CONTINUE TO go onto other doctors until someone can give you an explanation that at the very least makes sense!!!

This day and age about "people" not being "educated" about medical problems, especially chronic ones, has far past us. The majority of this nation and around the globe, with the internet, and so many "reliable" web sites, doctors, specialists, documentation, everywhere can absolutely have a great deal of information about "possible" things that could be wrong, to others letting them know possibly how they dealt with a certain treatment, or surgery... and YES, there is also some BAD information out there too You must use you "brain and common sense" when it comes to weeding out the "good info" from the 'bad info"....

So, I totally understand doctors that get a bit annoyed with a patient that comes in and begins to tell them they know what is  wrong with them, because they read it online, they heard it on day time TV, or several of their online friends have the same issue.

I get their point. But, when I go in, I don't begin to "rattle off" what I've found online, I usually go in with a "list".... and I ask questions, about certain things I may have read online. Yet, I try not to put my foot down and say "I know what it is because I found out about all of it, here, there or yonder. But ALWAYS TAKE A LIST!!! I can guarantee even though you may have a photographic mind, and like myself I used to be able to do all kinds of things and multitask. Yet, now days, as soon as I walk into the doctors office, I've without a list I would forget have of what I went to ask about. Thus that list helps to keep YOU focused, and also let them know what kinds of things maybe going on with you, that can help them to make a better "guess-ta-ment" or find the answers to whatever is going on with you and your health.

So, now I get to the article below. Which talks ALL about the VERY thing I've been fussing and griping about!!! A very SIMPLE test, that is certainly NOT INVASIVE, and it MUCH CHEAPER than many of these other tests, that give the doctors, a much better look at what might really be going on, especially when it comes to joints, inflammation and on forth.

So, PLEASE take a moment, and read this below!!! Then PLEASE share it with your own friends and those who have been through hell and back, sometimes for YEARS trying to get a right and accurate diagnosis!

I have already got it where I can print it and take it to my own doctors!!! I think they all need a "wake up" call. 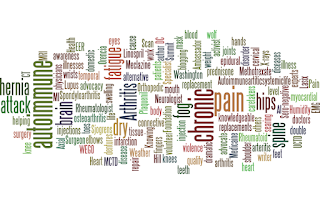