Happy Labor Day - Journey's and How Our Lives Change Within Moments - Coping with Grief, Chronic Pain, Lupus, RA, Sjogren's and taking one step at a time.... 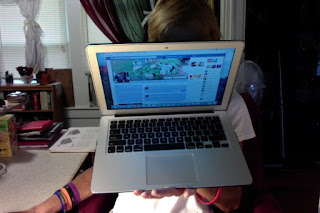 I’ve felt so many different emotion since June 9th, when my Mom passed away. As I told my daughter Amanda on Friday evening over the phone, I think the entire ordeal is just now beginning to set in as reality. I catch myself wanting to call Mom to tell her something or ask her something… often times a week. Then it dawns on me, I cannot do that via telephone anymore…. I’ve put off really doing ANYTHING for just myself. I’ve been so busy taking take of all that needs to be done, from paperwork, to painting and working on the house there, that I have NOT had anything I really wanted, needed - other than the weather get nice enough and for me to be well enough to feel like going to Winstar in OK for a night. As soon as I can find a Sunday and Monday, here, there and between there is going to be nice weather I plan on going and it will be a “delayed celebration” of what would have been Mom’s 81st birthday on August 28th.

But, it came to me a week ago, if I don’t find some other way to sit at my computer to “write” I will never get it done. Right now due to my neck needing surgery, and possibly my lower back, I cannot sit here for very long at a time…. plus when I have the surgeries, I won’t be able to sit like this, due to the neck brace for 6 weeks and so on…. 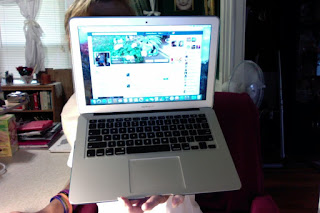 SO, I decided I CAN sit on the sofa, with my legs up, where my ankle also does not swell so badly, and THERE in the evening after dinner when these two hellions (Bub’s and Peanut” calm down - one on each side of me, would be a perfect time for me to get some writing done, more on my blog, be able to get possibly back into my advocacy work, but MAINLY WRITE! I desperately NEED to finish my 3rd book, and after what happened to Mom from this past January till June 9th, NOW I totally understand “why” my writing was “delayed”…. it is clear as day, that I MUST include all of what Mom went through along with myself, as a caretaker that needs a caretaker…. and so much that no one even knows happened…the details of each and every day being there with her those six months, even sometimes changing from hour to hour…. I witnessed such an unbelievable change in her emotionally, physically and mentally… and that is why my writing was put on hold…. I have much more to add to that journey, for myself, for her and for my kids… and Grandchildren later and those to come… SO I broke down and ordered an Apply Air Laptop. I didn’t get the “biggest” or most expensive, because some of it I probably may never use. But, the screen is large enough, and I already love the way the keyboard is laid out and back lit…. 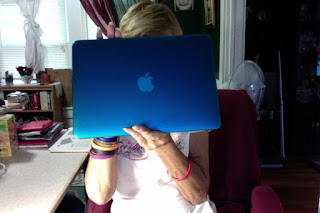 I just received it late yesterday via Fed Ex, so I really have not had much time to “learn” about it…. I felt much “guilt” and hesitated at first before I bought it, BUT, I recall what my Mom said to me, several times, but moreover just before she began to really show the signs of getting so bad, so quickly, she made me “promise” I WOULD complete this 3rd book, and have it published. MOM was and will always be my “Greatest Fan”…. So, I want to fulfill that promise to myself and to her…

thus then I knew the laptop made perfect sense…besides, as much as I LOVE MY PRIUS! And planned on leasing another the first part of 2017, if I forgo that, and drive Mom’s Elantra, which only has 10,000 miles on it, and just needs a battery and tires (from lack of her driving it much) then I could do away with a lease payment and higher insurance… I have not made that decision yet, because that Prius was the BEST thing I’ve ever had in my life, as far as “items”…. but I have time to decide… so by then things will be more centered, and I will be able to make that decision. So, here are a couple of photo’s of my Brand New Apple Air Laptop! 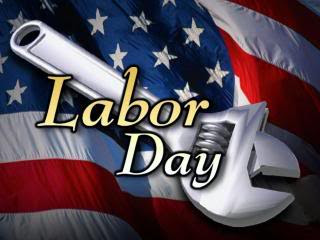 Why Do We Celebrate Labor Day and How It Began!


For a lot of people, Labor Day means two things: a day off and the end of summer. But why is it called Labor Day? Labor Day is a day set aside to pay tribute to working men and women. It has been celebrated as a national holiday in the United States and Canada since 1894.

­­
Labor unions themselves celebrated the first labor days in the United States, although there's some speculation as to exactly who came up with the idea. Most historians credit Peter McGuire, general secretary of the Brotherhood of Carpenters and Joiners and a cofounder of the American Federation of Labor, with the original idea of a day for workers to show their solidarity. Others credit Matthew Maguire, later the secretary of Local 344 of the International Association of Machinists in Paterson, N.J.

The first Labor Day parade occurred Sept. 5, 1882, in New York City. The workers' unions chose the first Monday in September because it was halfway between Independence Day and Thanksgiving. The idea spread across the country, and some states designated Labor Day as a holiday before the federal holiday was created.
President Grover Cleveland signed a law designating the first Monday in September as Labor Day nationwide. This is interesting because Cleveland was not a labor union supporter. In fact, he was trying to repair some political damage that he suffered earlier that year when he sent federal troops to put down a strike by the American Railway Union at the Pullman Co. in Chicago, IL. That action resulted in the deaths of 34 workers.


In European countries, China and other parts of the world, May Day, the first day in May, is a holiday to celebrate workers and labor unions. Before it became an international workers holiday, May Day was a celebration of spring and the promise of summer. Membership in labor unions in the United States reached an all-time high in the 1950s when about 40 percent of the work force belonged to unions. Today, union membership is about 14 percent of the working population. Labor Day now carries less significance as a celebration of working people and more as the end of summer. Schools, government offices and businesses are closed on Labor Day so people can get in one last trip to the beach or have one last cookout before the weather starts to turn colder.

Links Below for More Information On the History of Labor Day