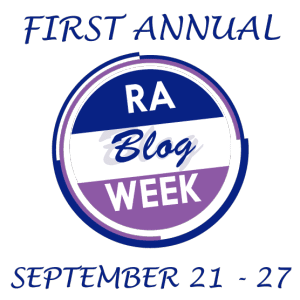 You may have heard someone talk about having moments where they feel as if they are "looking down" on themselves, as if they were watching their life, yet did not feel they were really living in it?

Or have a feeling of being "detached" from the world and everyone around, as an observer, rather than participating in the goings on in daily life...

This can be known as a mental disorder, if it is always going on. If a person feels always detached from living, like it is a "cartoon" or perhaps you feel not seen nor heard but you can watch from above and watch life take place.

In The Psychological World it would be known as "Detachment Disorder", one of the Personality Disorders people can have.

Well, in a way, this is almost what it feels like to have a chronic illness such as Rheumatoid Arthritis. Especially in someone that may be just diagnosed with the disease, or has not had a great deal about RA explained to them, or have not had the time to research and find out more how RA effects the body, plus the mental and emotional realms of daily life. Often I've felt as if no one else could ever "get it". They could not possibly have an inkling of what I felt. I felt all alone, and almost like I had something "mentally" wrong, as in having some type of personality disorder such as this.

At first, I could barely understand all of the ins and outs of what RA can do to the body, plus it can have dramatic effects on just how you feel about living with it. You can often feel physically so lousy, thus you do not want to see others, or try to explain to them what RA is all about. FEAR, ISOLATION, feeling that you are ABANDONED, that your loved ones may think you are lying, or that you are just making all of this u[p to get attention.

Embarrassed is yet another part at times of having RA, and/or other chronic illnesses. You do not want people to look at you like you are sick for if they see you as "RA" the disease, it maybe they "feel sorry" for you, or think you can't do things with them again.

Each and every emotion that you feel in "grieving" you can also feel in RA. Angry, frightened,depressed, thinking it is wrong, you cannot possibly have such a horrible illness, resentment, trying to even "bargain" with Your Higher Power asking Him to take this away from you, or asking WHY ME?
WHY do I have to be SICK?

Those and more are all of the "feelings" of RA for myself. At one time or the other, I've felt each of them, and at times several of them at a time.

I even sometimes feel like a "lab rat"... I guess you could medication might" stick and make you feel better. But, you may feel better in one way, then suffer from side effects that are worse than the RA itself.

You often wake up aching, throbbing, in several joints, and some days all over. I find it difficult some days to even think about needing to do some things I used to not even think about... cleaning, dusting, running errands, going out on a weekend. Yet, with RA, you have these feelings of what do I HAVE TO DO today, and what can I postpone until the next day? So, you slowly wake up, try to begin to move around and for me, then I go straight to the morning medications, taking them hoping that some of the fatigue, the pain and stiffness, the brain fog, and other symptoms will at least lessen enough for me to get through the day and do what I need to get done.

To have RA, is like having your life turned upside down, and then having to learn how to have a totally "new life normal", for all that you did have that was normal before RA, for the most part has totally changed.