Texas Weather & Talk About Effecting Our Joints and Bodies!! 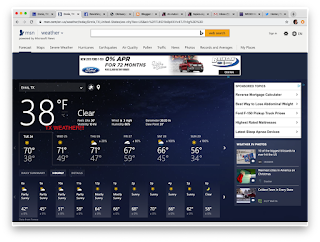 I recall one Christmas fixing Dinner at my Home in Blooming Grove with the A/C on shorts!!! I was at least 72 that day!!! Insane TX Weather!!!

New Flu Treatment Approved, RA Doctors how many have you seen?


On the "average" how many Rheumatologists have you seen before you found one that was "okay" as far as treatment, diagnosis and so forth?

I FINALLY did get to the RA's Office on Friday. Of course I rarely see him & have to see his NP or PA (actually I am not sure which one she is). I believe she is in school to finish up the PA License. Anyway, I had to go over the entire story starting from about the end of May or so, till the pacemaker finally. Actually I had filled all of that out & more earlier that week before going to the office SOnI would NOT have to spend 45 minutes telling it again. Alas, if it had been my DOCTOR, he would have read it all, and knew exactly what had been happening with me. He always is on top of everything when I can see him. I told herI already had labs done (including everything there is I think) about 8 weeks ago for the pacemaker. I also told her from now on send my "lab request with me, I will have them done here at my PCP Office. At SW in Dallas, they CHARGE separately for labs & last time they did not tell me they changed that so it cost me the co-pay and then another 70.00 for "my part of the labs).. when I asked why it changed the lady on the phone said the doctors "lease" the offices, so that is separate now from the clinic! BULL! My RA Physician TEACHES, DOES CLINICAL ROTATION, DOES RESEARCH, & SEES VERY FEW PATIENTS..So, I have to believe whomever doing the billing for the labs is not billing correctly.. She put me back on the exact same meds I had been on that honestly I don't think work. She was shocked how much worse the RA was, especially when my left hand, wrists ,fingers, thumb was so bad. I am not sure if they are right on their diagnosis. Those fingers on the left hand are continuing to "turn"n& the middle finger is laying on top of my ring finger. Frankly after the last time I took 8 or 9 weeks of antibiotics, & they never did know if I had "reactive infectious arthritis" or the RA was getting worse or what. I came home Friday in rush hour traffic from Dallas & was just disgusted with it all. I FEAR the Enbrel now since it's an injection weekly & I seem to not stay free from infections then add the Enbrel & that can cause them to be worse. Plus here is the flu season. Sounds like we are in for a huge problem with people being extremely ill even in the hospital with the flu this season. So, be sure to GET YOUR FLU SHOT, get the kids to understand to wash hands, not drink or eat from others & if anyone has the slightest sign of flu, go immediately & get the new shot. It won't _cure_ it but it will keep you far less ill, & get you well within a few days rather than like some and take a month or get pneumonia. (Xofluza, which can be taken via a single oral dose to help patients recover more quickly from the flu.)

2016 Flu Vaccine and the New Pneumonia Vaccine - Lupus and those with other Chronic Illnesses..,

http://www.lupus.org/answers/entry/are-flu-and-pneumonia-vaccines-safe-if-I-have-lupus
I know some of us question if we SHOULD or SHOULD NOT get these vaccines....I get mine, and I also got my new Pneumonia vaccine, because it provides coverage for hopefully 23 types or pneumonia - the 1st day after I had them both (in the same arm due to my right shoulder being completely replaced, so my muscles are not very big on that arm) my arm itched and felt like it was burning. BUT, the next day, all of that stopped, and my arm is sore, but it does many of us that way.
My pharmacist as well as my Rheumatologist recommended I get BOTH! Although we with chronic illnesses may not get "as much protection" as those without chronic illnesses, we still get SOME... since I have had "double pneumonia" at least 2 times in the past year or so, and then twice before, I decided I had better at least try and give myself a bit more immunity if possible.
at September 08, 2016 No comments:
Email ThisBlogThis!Share to TwitterShare to FacebookShare to Pinterest
Labels: chronic illnesses, flu, Lupus, new pneumonia vaccine, RA

I have had to cancel me going to our High School's last football game with our big rivals over in Waxahachie, our county seat. We had planned to go several weeks ago and I bought tickets yesterday. BUT, it was NOT supposed to RAIN darned it! So, I have felt a bit "off" today for some reason. Just had a headache, my stomach not all that great.. and NOW it appears we will have rain about time for the game. Well if it were something extremely important, then I would "push" aside the warning signs of either a flare or my worst fear the flu. I have not gotten my flu shot yet and I've in the doctors office twice in the past 10 days. They were out of the vaccine this last time I was there, thus I have not went onto Wal-Greens and gotten it. Now I almost feel feverish, cold yet kind of clammy, and my legs and lower back are achey. So, bless his heart I guess he will have to go alone. He has called everyone we can think of, and of course the one time he tries no one is available In fact, one of the guys from his meetings has Lupus. He is in a flare right now actually. My husband called him earlier in the day to see if he was going. We had talked about catching up at the game and all sitting together. I met him Halloween night at the "birthday" meeting, and happened to mention the BAD "P" word! Prednisone… and something else was said and he happened to say he knew that P word well, he has Lupus!!! Wow, it is amazing how to "meet" other "birds of the feather"  Anyway, I DON"T want EITHER!!! And sure as HELL not the flu. Last time I had the flu, I got double pneumonia AND WHOOPING COUGH with it! I was on the sofa for about 8 days and could not barely crawl to the bathroom and back. It is a nightmare…. so at that time I had not been diagnosed with any type of AI diseases, but a PCP there already suspected it and was going to send me to a Rheumatologist there in Seattle. We came to Ennis before I went thus found out probably a great deal "too much" later about the MCTD, Lupus, Sjogren's, Raynauds, and the RA. Anyway, keep me in your minds over the next 2 days. I and my Mom are supposed to be going to a Girls overnight trip out on Sunday/Monday to OK, to Winstar! I am going to be extremely miffed if I am too sick to go! :);) Autoimmune Arthritis Illnesses??? "Ain't they grand?!"
at November 08, 2013 No comments:
Email ThisBlogThis!Share to TwitterShare to FacebookShare to Pinterest
Labels: autoimmune arthritic diseases, bio-markers, chronic illness, chronic pain, flare, flu, mixed connective tissue disorder, MS, RA
Location: United States
Older Posts Home
Subscribe to: Posts (Atom)